Cambodia was our next stop, so early one morning we woke and hailed a cab to Lumphini Park where we hopped on a bus heading to the casino at the Thai-Cambodian boarder. Alongside older gamblers who were very kind and made sure we understood what was happening every step of the way, we were dropped off just outside the boarder. We’d read about all sorts of scams so we kept telling the “helpful” people who approached us that we already had our visas and we were waved off in the correct direction and we were on our way to our next country.

Emer: I knew there were beautiful temples to be found in Siem Reap, but I had no idea how many there were. We were at Angkor Wat for a cloudy but still spectacular sunrise. We then spent hours walking in and around the massive temple…but since we were there before 6am, even after spending what felt like hours it was still early.

We then moved on the Angkor Thom temple complex and we were again gobsmacked by the grandness, the size, the detail, and the beauty.

By the time our tummies started rumbling signaling lunch time, our feet were soar and we were all temple-tuckered-out. 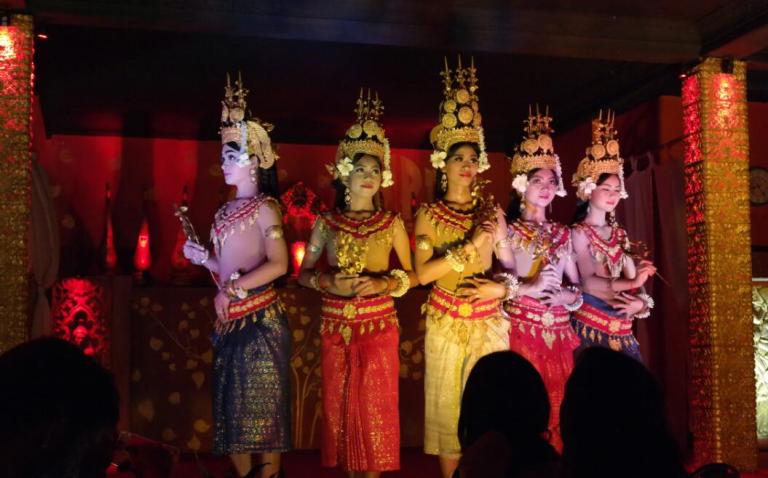 Matt: Cambodia is a beautiful country with a lot to offer, but one of the first things I noticed was the poverty.  While every Asian country we visited has poverty, it seemed more wide spread and almost universal in Cambodia.  This is likely due to the Khmer Rouge and the relatively recent history of social uprising, but I will get into that more in the next piece.

When you are in Cambodia, the local currency is… US dollars???  They do have their own currency as well, the riel, but this is only used (at least for foreigners) for denominations under $1USD.  While at times this makes life easier, I feel at other times this does a bit of a disservice because prices are set at $1USD.  When postcards elsewhere would be in the 3 to 4 for $1 range, most places here ask for $1USD per postcard (that’s why none of you got any postcards from Cambodia).

One of the biggest draws is the temple complex known as Angkor Wat.  This series of temples, which spans over many square miles, is way too big to see it all (at least not over a short period of time).  What people generally do is hire a driver for the day who can take you from one site to another to try and fit as much in as possible.  This is another place where you drive by phenomenal temples, that if they were anywhere else would be national treasures, but due to the proximity, aren’t even talking points as they are considered lesser temples than their more famous counterparts. 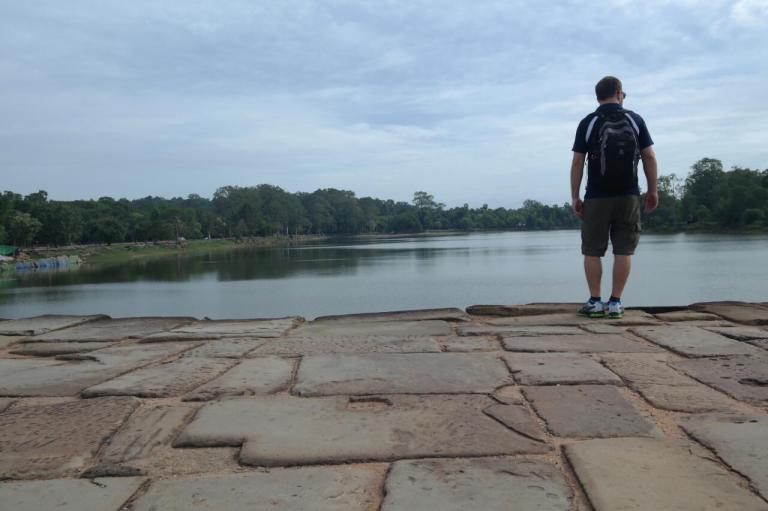 The biggest and main temple of the set is the one most prominently featured on the postcards I did not send. It is spectacular in its massive and sprawling nature, with stone towers and walkways. A common thing is to be there for sunrise to see as the light first makes its way over the far off walls.  I think this alone was worth the price of admission.

There were some rumours that this temple was used in Indiana Jones and the Temple of Doom, but I couldn’t confirm such a claim. After we spent some time wandering and wondering what this relic would have been like in the height of its glory, we were back in our tuk tuk and off to the next site. This next site was one that all temple explorers would love as it has the stone faces that are at least 10 feet high sitting atop of many of its towers.  I did wonder if this temple was the inspiration for Fireball Island, but was glad to see no fire balls spewing from their mouths that day.

The final temple that we visited on this day was made (even more) famous by its use in one of the Lara Croft Tomb Raider movies. The most recognizable part of the temple is this one tree in particular that has grown into and around the temple (this tree is also featured on many postcards I did not send).  After telling Pat this, he insisted that he had never seen the movies and would therefore not recognize the  tree.  I tried to inform him that he would know it instantly, and he assured me he would not.  So after walking around the complex, answering “no” to the same question of “is this the tree?” asked umpteen times, we finally turned the corner and saw “The Tree”.  For some reason this was the first tree Pat had seen in the last hour that he did not ask if it was “the tree”, and I knew he knew what tree it was…