Emer: A full day trip to Chiang Rai included the White Temple, Golden Triangle, and Long Neck Karen Tribe. The first stop, the White Temple, was so cool we thought it deserved its own post (read all about it here).

Next up was The Golden Triangle – from the shore of Thailand you can see Laos and Myanmar. There was the option to go out on a boat to be right up at the Laos boarder, but we decided the view from shore sufficed. What was really interesting was that the water on each side of the boarder is a different colour, creating a distinct line. All along edge of the river were statues and stalls. We enjoyed some of the sweetest sliced mangoes we had all trip and gazed at the golden big Buddha. 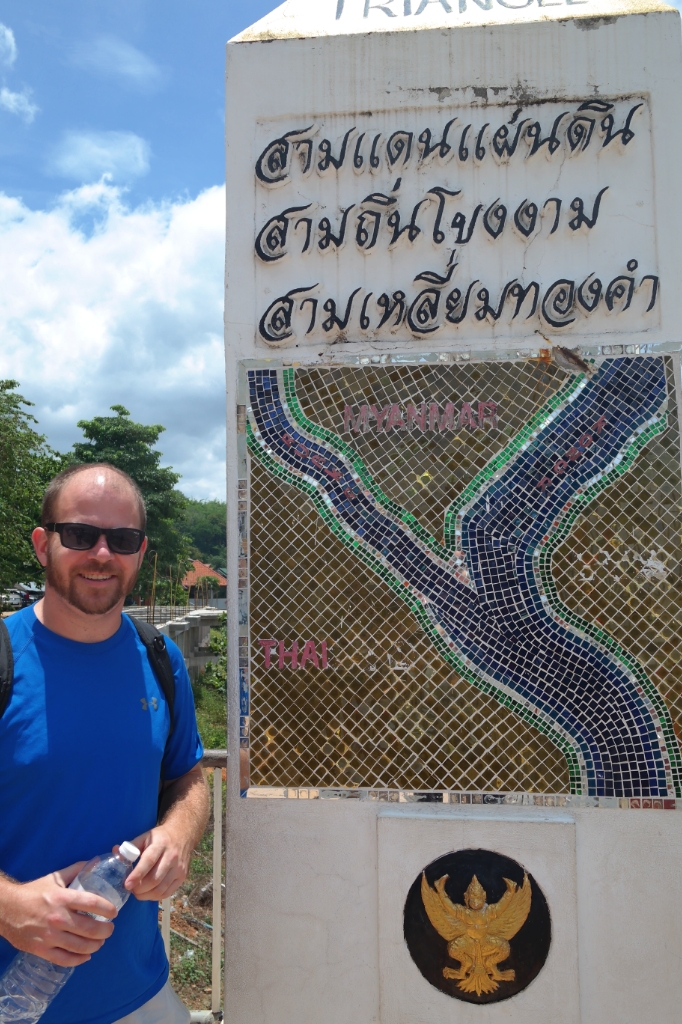 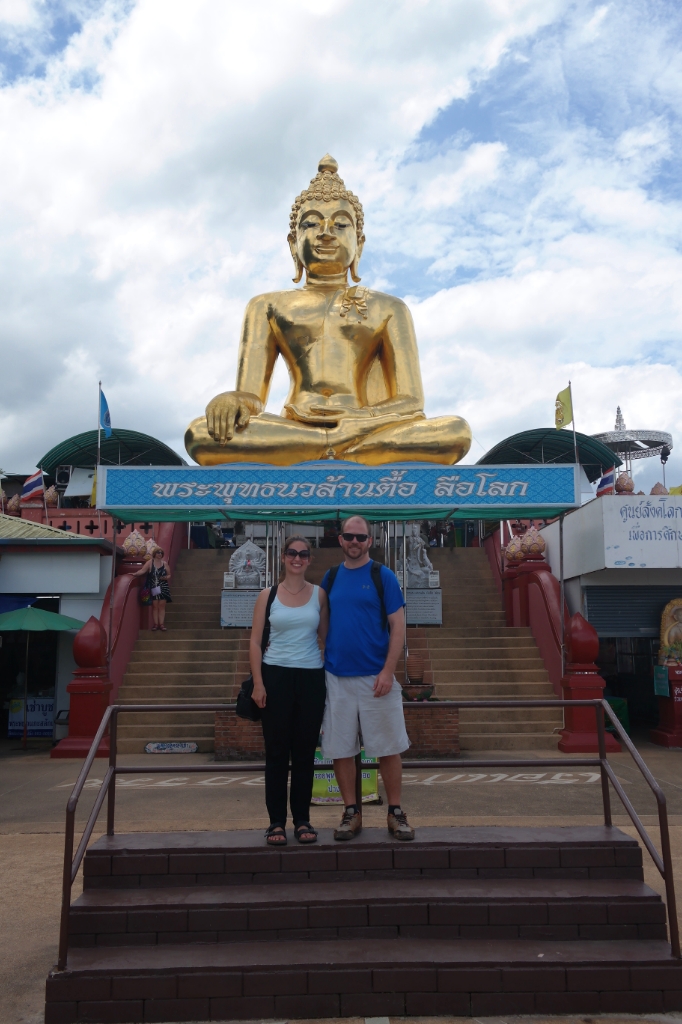 The afternoon activity was a visit to the Long Neck Karen Tribal Village. I thought it was interesting to see the traditional attire, and though it was very much a tactic to entice sales, at least here was some sort of cultural exchange. It was odd in a way, it almost felt like the women were on display, and the idea of a human zoo or living museum does not sit quite well. It was interesting to see an older, traditional culture. I overheard other visiters scoff at seeing satelite dishes, which they assumed indicated these weren’t “really traditional” settings. But why shouldn’t they be able to evolve and enjoy entertainment and Keeping Up with the Kardashians if that’s what they’d like? I’m still not entirely sure where I stand on it all. But I did get some pretty pictures and a very nice woven scarf. 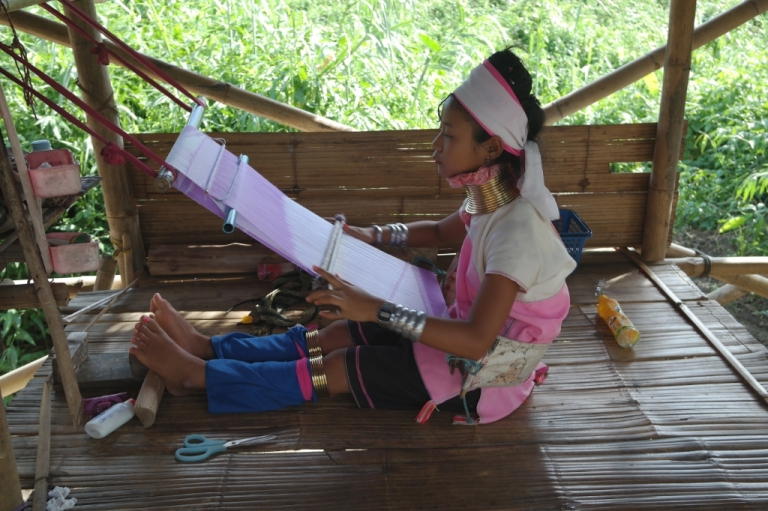 Matt:  Of the day out, the White Temple was certainly cool to see, but the weirder and more thought invoking had to be the long neck tribe. To say it was a tribe would be misleading, as would claiming you’re only going to see the long neck tribe. These indigenous females (who ranged from children to elderly) were two small sample groups of two different and much larger tribes.  There were the long neck women as well as the elongated earlobe women. Each had been brought down from their mountain home to be put on display for tourism.  They were sitting at the end of a mocked up village, intended to display their actual living conditions, in stalls, selling the same cheaply made and available everywhere nicknack junk.  It was the same stuff found in virtually every market within a thousand miles of where you were standing. This hardly showed a people, a way of life, or their own cultural existence different than the norm.  I found it very sad.

I understand that if these individuals had not been brought down I would have never seen any.  I understand that if they all stayed in their actual villages, they probably wouldn’t want me coming round taking pictures. While the argument can be made that this was a method of them attaining money for their community – we were told many were illegally in the country and therefore couldn’t make any other living – it made me think what have you really saved if you had to give up everything to save it?  I get that one individual’s sacrifice for the good of the whole is a noble cause, but is it really in the collective’s best interest?  What are you sacrificing? Is it necessary to convert every last soul on the planet to capitalism and commoditize  every inch of space, culture, individuality, and difference? To see the look in the eyes, to feel them playing the sympathy card to make a sale, it felt cheap and dirty.  Maybe it was all an elaborate ploy. Maybe they really were enjoying their day away from their village and way of life.  Maybe I misread it all. 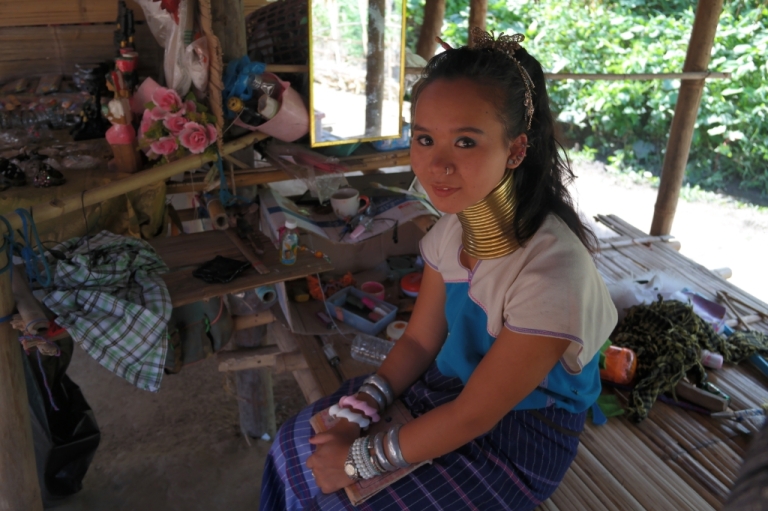 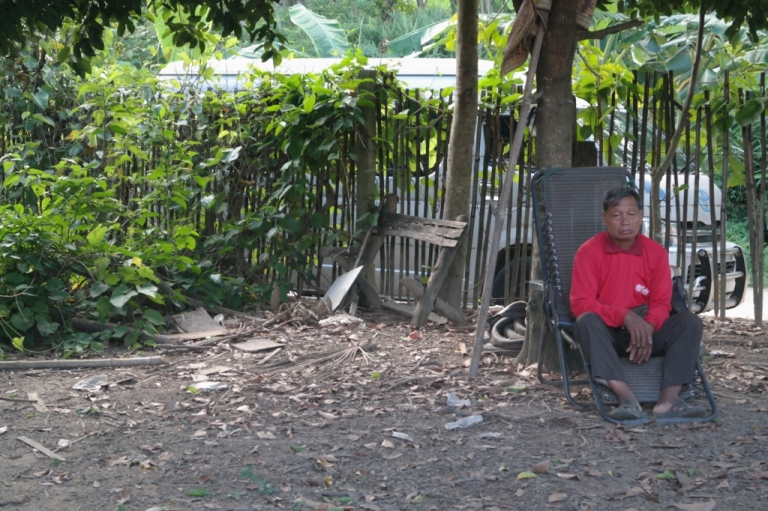 2 thoughts on “Rest of Chiang Rai”