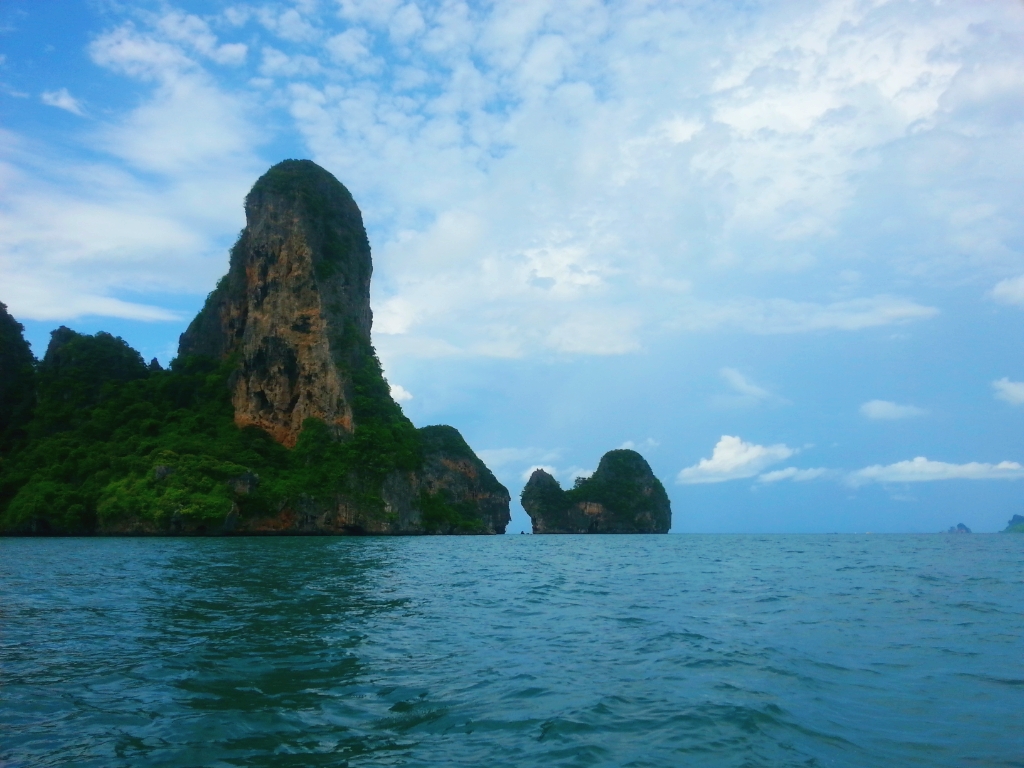 Ao Nang in Southern Thailand was a total tourist beach destination – but after the previous not-super-friendly stay in Hat Yai, we were a-ok with stopping in an uber tourist trap.

E: With a Thai mojito in hand, we took in the beautiful coast boasting an oceanscape dotted with beautiful islands and rock formations. 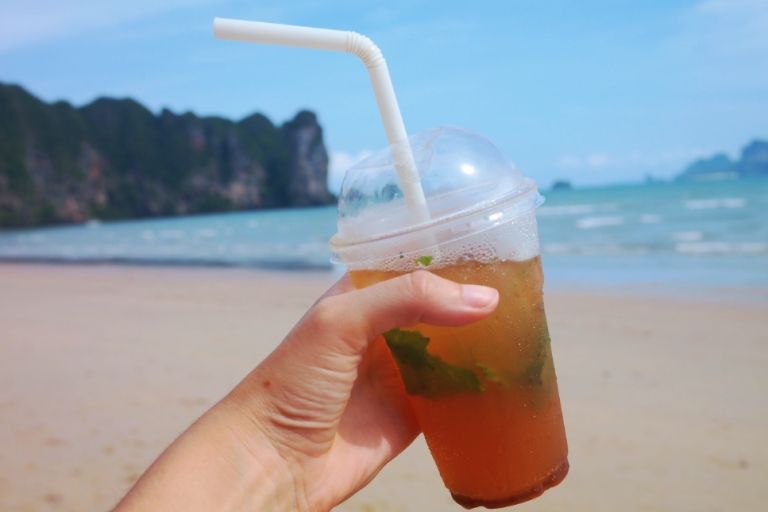 A beach resort town meant there was a nightlife. After a nice dinner we happened upon a seemingly unassuming alley, which opened up into a courtyard lined with bar after bar after bar. Before we could absorb the surroundings, we were bombarded by hosts from each establishment (and there were a lot) very loudly and aggressively trying to steer us towards their bars with their drink specials. It was all a little much. Being overwhelmed we just took a seat at the closest one and thought we’d figure it out from there. Once seated we were left alone and allowed to gain our bearings. We spotted a western themed bar in the corner that offered live music and decided that was our next stop. It was so fun. The band was energetic and played awesome covers. It quickly turned into one of our few big nights out on our trip, a total blast!

After booking a ticket to head north the next morning, I hopped on Facebook and happened to see my brother Jonathan (whom we had previously visited in Manila) had posted a pic of the night market in Krabi Town – just 20ish minutes away. The coincidence of the timing of logging on added with finding out Jonathan rarely ever puts a location to his posts, urged us to alter our arrangements. We pushed our trip back to have the chance to hang out with Jonathan in his home turf so to speak (previous to the short stint in Philippines he’d been living in Thailand for over a decade). He took us around the Krabi Town Night Market, which was refreshing as it was geared to locals and not just pushing the same tourist crap.

Everything was so much smoother being with someone who spoke Thai – communication with taxis, directions, and our favourite, ordering food and getting it spicier than the tamer tourist taste.

M: Ao Nang is certainly not without some scenery of its own. As you look off the coast there are so many amazing islands with sheer cliff faces that drop right into the ocean.  Simply stunning. 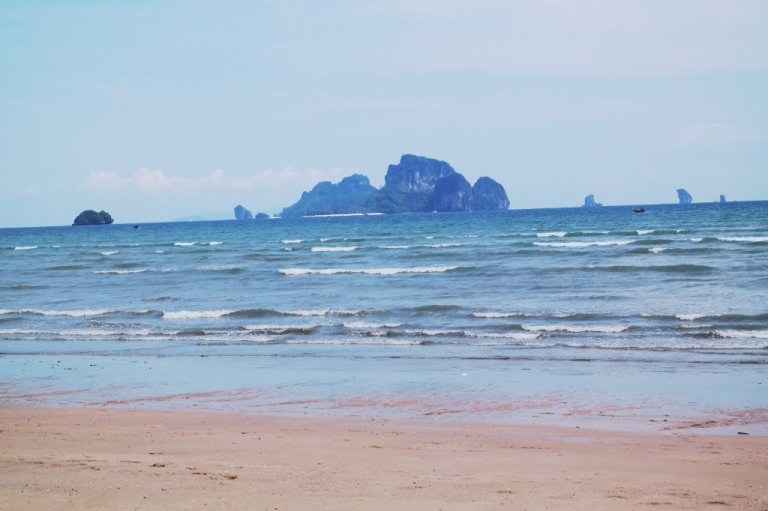 As our time spent in Hat Yai was mostly in our hotel recovering from the train rides (and accident), Ao Nang felt like our first real stop in Thailand. As such, the first order of business was to sit down and order some pad thai!  While it was not much to look at, it actually tasted pretty good.

Another Thailand first came when I saw my first Thai lady-boy!  This was just the first of many as their prevalence certainly lives up to the storied Thailand stereotype. This brought up so many philosophical quandaries for me regarding the status and acceptance of transgender in society. If the West was more enlightened and open to non-traditional gender roles in society, would there be similar ratios? On another line of thought, were some people filling a role of expectation of what has become a tourist preconceived notion and now deemed somewhat of a marketing ploy?  If the latter, how were they viewed by their family and society? We were informed (though I have no way of determining the validity of this statement) that lady-boys are not only accepted, but often considered good luck for the family. Which only brought up more questions, such as in a country as accepting as it is, why are there no gentleman-girls to speak of? Is there still an unequal expectation of genders in this more accepting society where it is more accepted for females to act in more prodimenatly male behavioural roles than the other way around causing less of a desire to have a gender reassignment to feel comfortable in their own body?  Or might there be a biological basis to males being more prone to gender reassignment?  At the end of the day, regardless of the reasons, provided they made the choice by their own free will and it has enhanced their own self worth, I say go for it!

5 thoughts on “Off to Ao Nang”