It was easy to see much of Kuta in a short time so we opted to venture off on a day trip to see Seminyak. A seemingly nice and simple thought…or was it…

Matt: There is only so long you can travel through Asia before you get really tired of either constantly haggling for the best price or accepting you are getting a significantly higher price than the going rate. With this in mind, when I saw we could rent a scooter for only $6 for an entire day, I was sold!  Emer had figured out some sites in the area she wanted to tour, and I thought this was a much better solution than haggling for multiple cabs.  It seemed like the perfect plan in theory, however, in practice, things are never quite as simple as they should be…

For starters, Emer was not comfortable driving a scooter, so we were going to be doubling.  While it had been a few years since I last drove a scooter, I figured it was just like riding a bike and would come back in no time.  Of course, the last time I drove a scooter I didn’t have a passenger on the back who was riding a scooter for the first time and hadn’t mentioned to me just how terrified she was before she got on.  So with these starting conditions, we set off.

As we pulled out of the hotel, the sudden realization that Indonesians drive on the left didn’t help my passenger’s nerves as I swerved back onto the correct side of the road out of the way of oncoming scooters.  The fact that the lanes are merely suggestions also did not have a calming affect on Emer.  As we followed the roads through the town, the ride was certainly an interesting one.  Between having the life squeezed out of me, jumping and yelping with every little bump in the road, and leaning away from the corners instead of into them, Emer was not the ideal passenger…

I think relieved is quite the understatement for how we felt getting off the scooter.  We decided to leave it parked where it was for the day and take in the rest of the sites by walking.  When it was time to make our way back to the hotel, I think Emer somehow willed the back tire to spring a leak and go flat so she could do the final stretch on foot. Deciding I didn’t want to push this heap back, I slid through the final few corners on the flat solo (much to Emer’s delight).

Emer: The idea of zipping around town on a scooter had held an appeal to me – but after being on the back of a bike in the thick of death-dodging traffic, I refined that appeal to a cute Vespa on a more organized road in Europe. I knew I was a little nervous but I didn’t realize just how scared I was. Nerves definitely did not help the situation as I hopped on the back and squeezed the air out of Matt on an already super sweaty day.

After we arrived in Seminyak it took a good while for my heart to calm and and knees to stop quivering. A fresh juice at Zucchini Cafe was a good start, but didn’t settle me fully. 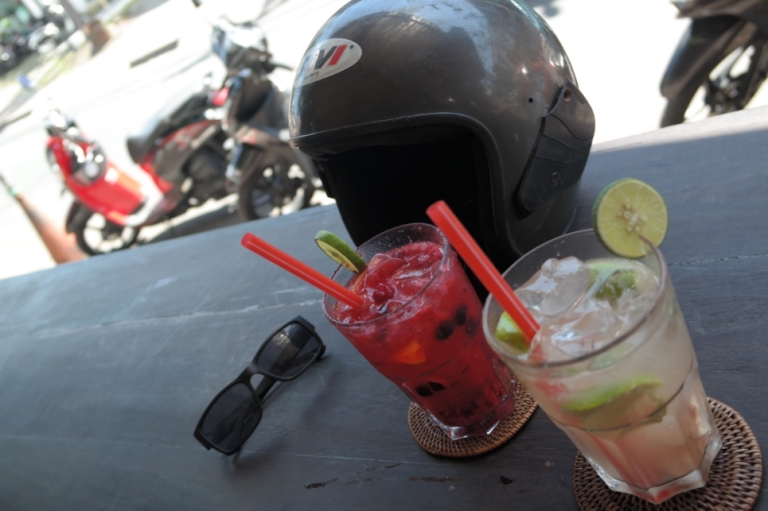 I had heard about Fat Turtle from Instagram so we sought it out – unfortunately the instapics were more appealing than the food.

After the disappointing lunch we finally found the beach – the reason we made the trip. It was beautiful and for a moment I forgot about the scary scooter.

Before heading back to Kuta we had a delicious Peking duck appetizer at Ginger Moon – just delicious. 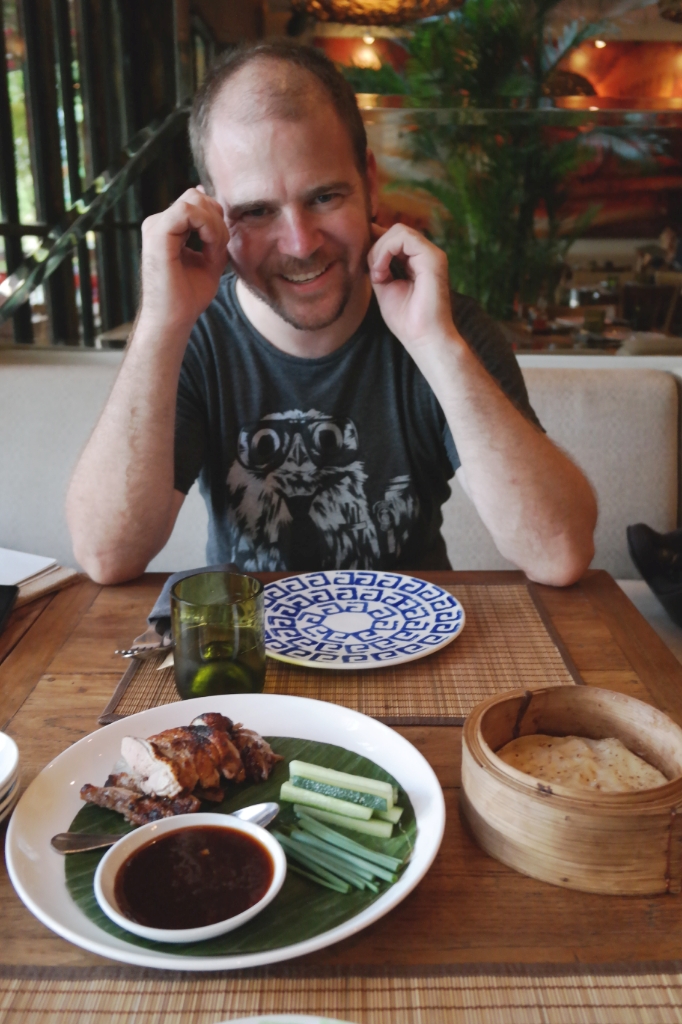 And then it was time to brace myself for the return route. Unfortunately having one trip under my belt did not make the second one any easier. But we survived and I can now say I’ve ridden on the back of a scooter all the way to Seminyak and back.