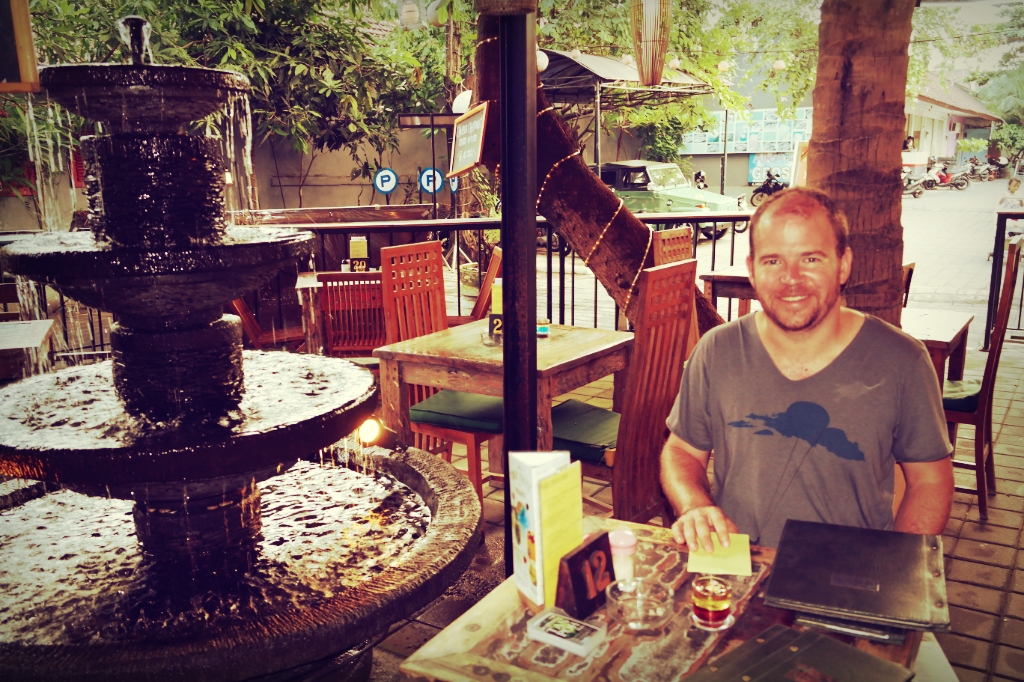 Kuta, the Cancun of Indonesia, has the reputation of being overrun by young drunk Aussies. Many advised us to avoid this area at all costs – and while we enjoy a few beverages, the idea of all day and all night raging has lost its luster a little. But, Kuta is close to the airport and we were planning on just a few nights before taking off to Flores for komodo dragons, so how bad could a couple nights be?

The best part about Kuta after having spent lots of time hiking around Borneo was the opportunity for a body break (Canadians will understand when I say it’s hard not to add “with Hal Johnson and Joanne McLeod” after that last phrase). This was helped out by the abundance of spas and their inexpensiveness. $5 for a one hour massage? Yes please! Every day I indulged in either a full body massage or foot reflexology. One time, our meal even came with a complimentary neck and shoulder massage (if only every dining experience came with one!).

When I was exceptionally sleepy, I was extravagant and had the masseur come up to our room (a whopping $10 for an hour of blissful laziness followed by a fabulous sleep). Speaking of sleeps, we stayed at Flora Kuta, a clean place with big rooms, lovely pool, and only around IDR250,000/night (including breakfast) through Agoda.com (plus they let us leave our bags there at no extra charge when we flew off to Flores). It’s tucked away on a small alley-like side street, walking distance to everything without being in the thick of it. 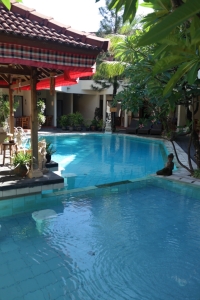 While I’d be warned of young partiers, I’d say partiers yes, but the age of the partiers were wider than anticipated. All in all we didn’t encounter any extreme loud or obnoxious behaviour…but to be honest, we just might not have put ourselves in the right areas at the right time for all those shenanigans. We did find some very nice chill spots, my favourite bar none was Kori where we had our own private pagoda one had to walk over a little bridge to get to. Too fun!

Beyond the perimeter of the busy beach, the rest of Kuta seems mainly comprised of a lot of stores with pushy sales people, selling the same things. Not a place you’ll regret skipping when in Bali, but not bad if you want airport convenience and some pampering.

For some reason, even though we had just left the majestic jungles of Borneo, the phrase “welcome to the jungle” seemed oh so fitting for our arrival in Kuta. Primarily known for its partying, for that reason I felt we had to take a look. Kuta seems like quite a muddled place, trying to shift its focus from young party-goers to an older, more wealthy and respectful demographic, while still not alienating the current party-centric stream of income. The beach was absolute madness with barely any sand to be seen between the people. For a beach that should seem miles and miles long, it was way to claustrophobic for me, so we moved on quickly. 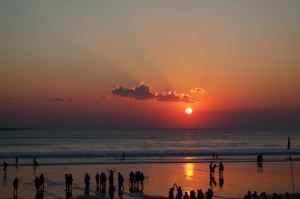 Behind the beach is a street lined with pricey stores and restaurants which seemed to have a different demographic than I expected from “crazy” Kuta. These places were filled with families with young children and retirees who were there to relax more than let loose.  We had a lovely Italian meal and were shocked when we tried to go for a post dinner night cap and absolutely every place on that strip was closed by 11pm.  On a Friday no less! Perhaps as one street closes, another is just getting going.  Legian Street, a few blocks from the beach, is where the party goes all night. Though fairly sleepy during the day, many of the bars along Legian will serve around the clock if you have the longevity for it.  Walking down the street you will encounter many strange things for sale.  One of the strangest items you will find there are the wood-carved cocks.  And boy will you find a lot of them!  Some are bottle openers, some are key chains, some are ashtrays (certain creativities were taken with the testicles on these ones), some just seemed to be table ornaments. Some big, some small, some were painted, others simply varnished. If you really wanted you could buy them in packs of five, though what you would do with one, let alone five, is beyond me. 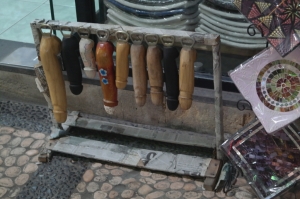 After walking by those odd pieces, we were bombarded by locals trying to sell me Viagara…again (this happened many times in Manila, Philippines).  Maybe I am not aging as well as I think?  After declining Viagara, they would go on to offer all sorts of narcotics including magic mushrooms, which they insisted were legal there.  Then again, maybe I am aging better than I think?  After assuring them that regardless of the legal status of whatever they were trying to sell me, I was still not interested, I turned to Emer and assured her it was time to get out of the jungle.