Wow! Hong Kong was a whirlwind! Some say New York is the city that never sleeps, but the Big Apple ain’t got nothing on Hong Kong. HK is like NYC on neon acid with more people and more Chinese restaurants. 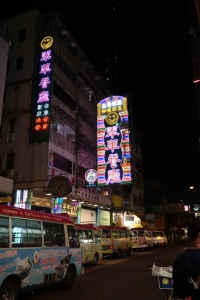 After a 5am arrival and a quick nap, we started the bender at the Rugby Sevens and didn’t stop for a week.  The Sevens are known as quite the international party scene, and though they were fairly unknown to us, hearing we were headed there turned many fellow travelers green with envy.  We got to our seats just in time to catch the Canadian Women win the Women’s final and give us reason to raise a glass!  After another few matches we were treated to the Canadian Men winning ther first match of the tournament. Sitting (though mostly standing and shouting and singing and drinking) in the South Stand is the way to go to fully experience the heart of this event. It was a mix between St Paddy’s Day and Halloween with frat party on top.  It really did seem like the partying was the first priority as we were some of very few actually trying to pay attention to the rugby at all! (Though I was informed that on the Sunday it’s all business with the finals going on…but the party stays strong.)

The very next day, minutes after meeting the groom for the first time, Matt was off to Maccau on the bachelor party with 15 other guys he had yet to meet. Very brave. Emer can’t say more because all she was told took place was “intellectual conversations among gentlemen”…but since the boys came back at noon the following day, with beers still in hand and a lit up viking helmet, let’s go on to guess a good time was had by all. 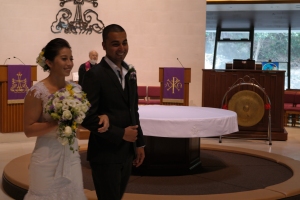 Though drinking was beginning to take the forefront of our activities, the real reason we directed our travels to Hong Kong was our friend’s wedding. The ceremony and surrounding activities allowed us the opportunity to meet many cool new individuals, celebrate our friends, a bachelor party in Maccau, a free flowing champagne bachelorette brunch, a dinner with delicious Peking duck, and go into a Sikh temple (and taste their vegetarian fare – apparently any Sikh temple you go to will feed you, this will be extremely handy information when we hit Northern India). 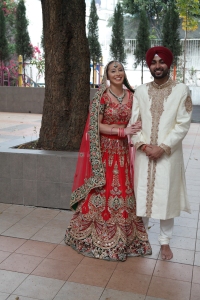 Somehow between all the planned events and activities, we managed to fit in Wednesday night at the racetrack! We “hop”pened to be there on Easter, hence the bunny ears in all the pics. Mix Easter Holiday with Sports Sevens holiday and it made for a lively and jam packed stadium. A fantastic atmosphere. In the end we think we just about broke even – but that didn’t make our wins any less exciting. 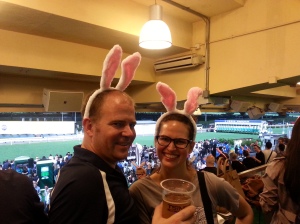 A nice change from city hubbub was a hike out in Sai Kung to Tai Long Wan beach. We walked through fantastic views. Odd note, many people seemed to be there to “walk” their dogs – and I use quotation marks because almost every dog we saw (and there were many) was being carried in a specialty carrying case in one arm while the other arm was holding a battery operated fan for the pampered pooch. 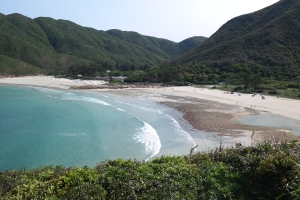 After a day of hiking, we opted for the speed boat route back, which added for some great scenery and exhilaration (though the waves didn’t do much for Emer’s stomach).  It was a great way to see something that wasn’t just the hustle and bustle of this crazy city!  All in all, our time in HK was a crazy fun blur, and if it wasn’t so bloody hot already in April, a city we could envision calling home one day.  Until next time Hong Kong, thanks for the good times!

P.S. We didn’t forget about one of our favourite travel elements, food, that aspect deserved a delicious post all of its own. Stay tuned…