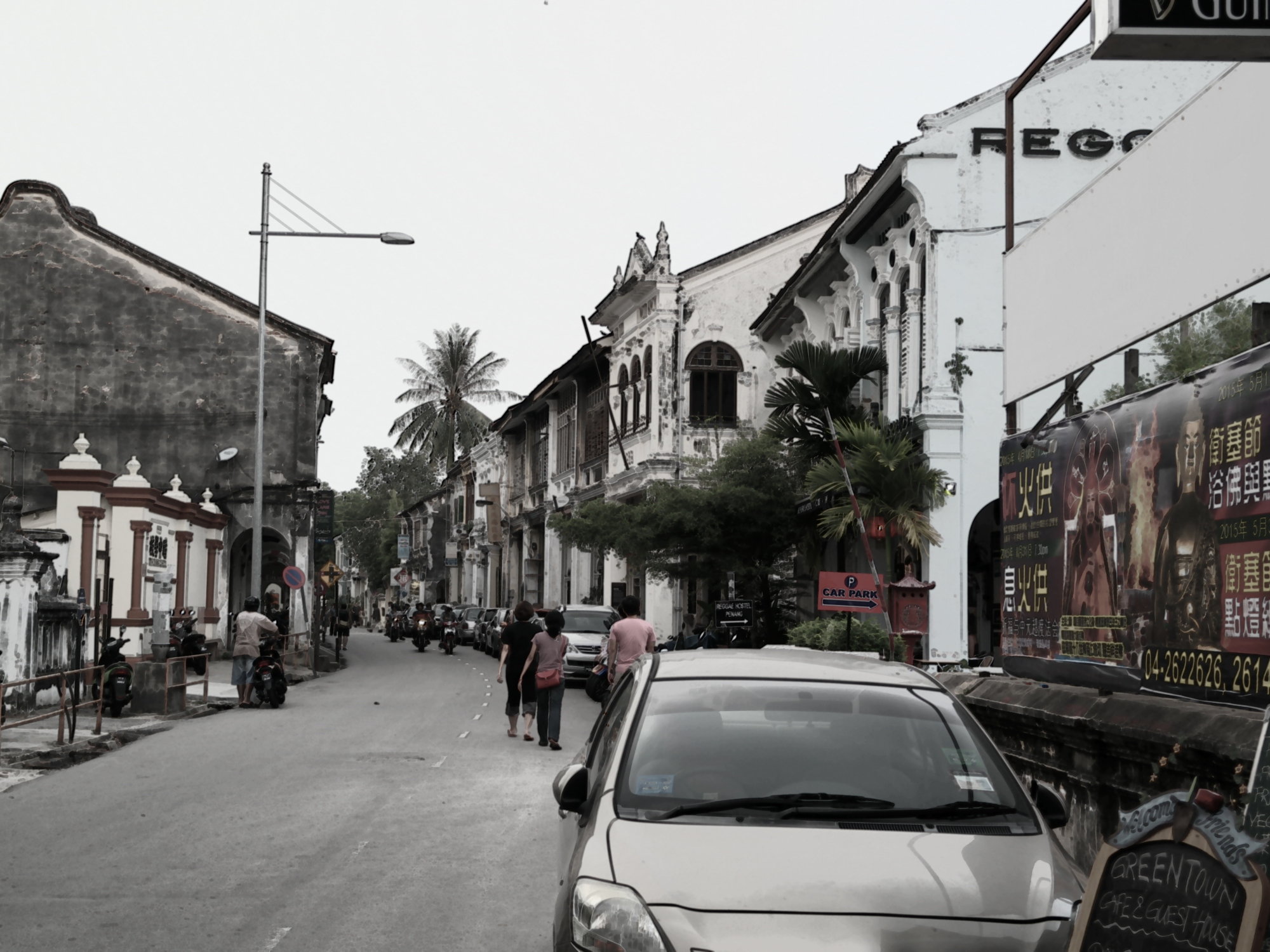 We left the lush, cool hills of Cameron Highland and headed to the city of Penang.  Having been told that Penang was a small island that was really easy to navigate, we were quite surprised by just how big it actually was. But size was probably a good thing due to my recent mishap that left us with electronics in need of replacing…Since the loss of these items was more my fault than Emer’s (or as some might say, entirely my fault), I was in no position to complain as we undertook one of my least favourite activities ever: shopping. And as if this need for electronics was not enough, Penang was our last stop before heading to a friend’s wedding in Hong Kong, and for obvious reason had not packed wedding attire for our with an open-ended itinerary, thusly creating a perfect storm of shopping needs. Based on the amount of time we spent inside different malls, if you told me Penang was the shopping capital of the world, I would believe you.

I am the type of person who would rather not have choices or competition among stores, or even within stores for that matter.  I would rather walk into a store for the previously determined item of need, know you’re getting a fare deal, buy the item, and walk out. Shopping is an act of necessity, not enjoyment, and should be done with such military precision as to ensure the absolute least amount of time lost in the whole process.  I don’t even like grocery stores for this reason, I lose too much time getting caught up with questions like: “what the difference is between the 20 different types of bread I see before me?” and “what is wrong with the human race?”  Unfortunately, my traveling companion views this whole thing quite differently, and as a result, we shopped and shopped and shopped.  At the end of it all, we had managed to replace the camera (got a great deal on a floor model…only problem is it’s pink!) and phone and buy what seemed like an entire new wardrobe at quite impressive deals which had to be hunted for.  Even though we’re in travel mode trying to stretch every dollar, given the opportunity to have two days of my life back in exchange for the price difference between the stores, I would take it!

[Emer’s note: “entire new wardrobe” was actually just outfits for the wedding…and a pair of pants and shorts for me…]

Finally, after ticking all the “needs” off the shopping list, it was off to actually see Penang and try out the new camera!  When tourists go to Penang, the main area of interest is Georgetown.  One of the things Georgetown is most famous for is its street art walking tours.  No one knows for sure how or why someone started painting these things (maybe it was the vikings?), but it turns out once you’re famous for them, you just keep doing it, I guess.  Some of the art is really quite cool, and some of it is less cool (especially when you hit the cat district of wall art).  Some of the artists have even incorporated external pieces such as a motorbike or barrel to supplement the paintings and give them neat 3D features.  While the tour might not be worth a trip around the world for, if you are in the area, definitely check it out (especially Bruce Lee drop kicking a cat near the wall art cat district). 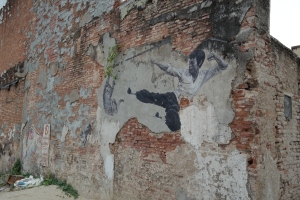 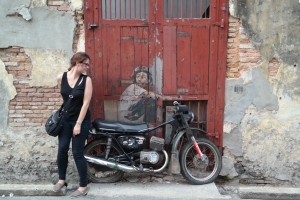 Penang turned out to be quite an interesting city once we got out of the shopping malls.  We were introduced to this cool place called ChinaHouse by friends of friends we visited.  Old building have been reclaimed into a series of restaurants and bars and art exhibits all under one roof.  As you walk in, there is a cafe with too many cake options to choose from (again, what is up with so many options?), followed by a cocktail lounge, followed by an outdoor zen garden, followed by a sit down restaurant, followed by a reggae/jazz bar where they have different artists come in each night of the week for a different vibe.  This last one was my favourite part! There we heard a Malaysian duo cover Bruno Mars and Meghan Trainor in a cross of reggae and lounge music. There was also a full blown art gallery upstairs with some cool and some simply bizarre pieces of art. 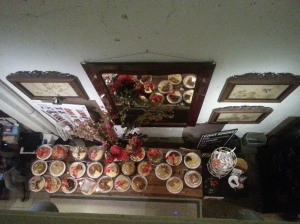 Other highlights of Penang included the street food, which was everywhere, delicious, and cheap.  Here Emer was able to get another fix of her recently formed satay addiction.

There are also the clan jetties, which house entire extended families and sprawl out into the ocean.  It seems everytime the family grew, instead of moving inland, they built another platform out into the water.  There are several communities living this way side by side, but not connected.  We were told that the different families were not friendly with each other and in fact often had feuds going on.  How true any of this is I don’t know, you’ll have to go to Penang yourself and decide!

One thought on “P is for Penang”