As life in the (mostly) sleepy Malaysian beach town of Cherating continued, we were happy knowing that we were extending our trip by conserving our budget. The only hiccups were when the work was more cleaning than maintenance, and I had to spend extra money on beers to forget the day’s work.

Then came our day off.  We thought we’d have a nice relaxing day of exploring on the beach, followed by a romantic dinner out.  The day started out on track, we slept in and had a very mellow start to the day, followed by lunch at a beach front restaurant. It was here that the day started to take a different turn.  As we sat over looking the water, we watched a family bring their car a little too far into the sand and lose all traction. We observed them start the process of trying to unstick their car and it immediately became obvious that this man, his wife, and two teenage daughters were not going to be able to push this car out of the sand on their own. So after another swig of beer, I set off across the beach to lend a helping hand.

I quickly discovered their English was virtually as non-existent as my Bahasa, so this would be another quest in non-verbal communication. After a few attempts at wedging enough wood under the tires (that only ended in me being engulfed in cloud of sand kicked up by spinning wheels), it was obvious that we needed a new strategy.  Through a few hand gestures, my new friend understood that I wanted the jack out of the trunk.  After a few short minutes, with ample wood under the tire, the car pulled back out of the sand, and was finally free from the beach’s hold.  As I tried to walk away a sweaty and sandy mess, the family insisted on giving me a watermelon as a thank you gift for my troubles.  Normally I only accept beer as compensation for such gestures, but that day, the watermelon seemed just as sweet.

Upon returning to the restaurant, Emer, who was particularly entertained by the part where I disappeared in a wall of sand, agreed I should go shower off the sand before returning to our plans of a day of exploring. 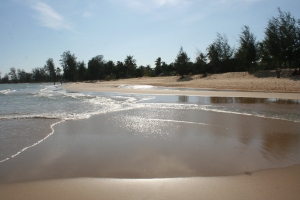 After a short detour to freshen up, and armed with a hammock, reading material, and a few beers, we were back on track to find a secluded part of the beach in which to waste away the afternoon hours in style and relaxation. During a previous trip, I had scoped out this very private area that was a short walk through some shallow water that I had had my heart set on getting to. What I hadn’t counted on was due to the time spent helping with the stuck car, the tide had changed and was now well on its way to its highest point. While it looked a little more daunting than at low tide, it still looked like a continuous sand bar connecting the two beaches was visible.  We waded through the water, making it more than 3/4 of the way across the opening when the waves started to increase in size.  Whether it was the waves moving the sand bar, or more likely me off the sand bar, it became clear that I had misjudged the power of the ocean.  At this point, realizing that I would not be able to keep my backpack dry and me afloat, I made my way as quick as possible to the nearest shore. But it was too late. Upon reaching the shore, watching the water pour out of my bag, I wondered if any of the electronics survived.  As with the normal wet phone protocal, I pulled all the batteries out, and tried to dry off as much of it as I could. We made our way back to our hotel and bought a bag of rice.  For those of you unaware of this method, (coming from someone who has dropped more phones in lakes than he would like to admit) if you can get the battery out, and get it into a bag of rice overnight, the rice draws the moisture out and can often save the life of your electronics. Unfortunately, in this situation the salt water did not want to play along, and everything I took for an unexpected swim was ruined.  There went the phone, the camera, and there went the kindle reader…Well s**t.

So all in all, while we managed to cut down on our day-to-day expenses to get our budget back on track, the fact that I managed to ruin over $1000 worth of electronics with one bad decision more than offset any savings we had otherwise made up.  I guess I’ll just chalk this up as another stage of my ongoing quest to attain complete unattachment to material possessions…

One thought on “Cherating Part 2 (the Day the Electronics Died)”