After almost two months in India, it was time for a change in pace; and landing in Kuala Lampur, Malaysia was quite the change indeed.  Kuala Lampur is a city that is full of the hustle bustle that India has, but it seems to do it with style and significantly less garbage (at least visible to the general public).  I think one of the first things I noticed was that when someone walked into me while I was sitting and eating, they turned around and apologized profusely. This just doesn’t happen in India as the concept of personal space is non-existence due to the sheer population density. It was a surprisingly nice change towards something you didn’t realize you were missing.

The next thing that you notice about KL is that the architecture is surprisingly mainly new and modern.  It seems to be taking on the look of a city of the future (though, the problem with the immense amount of cranes from the work in progress was that they obstructed views in photos). You got the feeling that this city would hardly be recongizable in the years to come as so much is currently in the process of change. 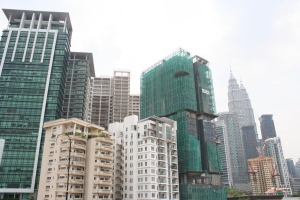 The city is fairly easy to navigate and the sights easy to find.  We decided to take their “Hop on, Hop off” bus, which for a pretty reasonable fee drives a loop around the city and stops at virtually all tourist attractions.  Once you get on the bus for the first time, you then have 24 hours (or 48 depending on the ticket you buy) of travel time to see the sights at your own pace.

We stayed right in the middle of Chinatown which made for quite the hectic stay.  Each morning and night having to make our way through the maze of stalls and vendors to get to and from our room, which was a bit of a process, but still highly enjoyable.  We also landed on the last day of the Chinese New Year’s festival, which added to the excitement.  The costumes and dancing in the street was a great spectacle for sure.  Though the loudness and intensity of the fireworks surprised me; they were much more intense than their Canadian counterpart that I am more familiar with. In fact, there were a few times I had to make sure that it was in fact a firework going off and not a bomb! 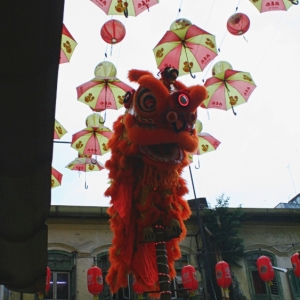 We loved all of KL that we saw (except our room without a window because we were being cheap – though the moral of the stories was we learned how important a window is and added it to our “must have” luxury list), but I think the highlight for us was the abundance of street food in Chinatown.  There was just so much to try, and only so much I could fit in my stomach at once. (I think Emer’s second highlight was haggling prices with all the stall owners who would often lower prices upwards of 75% to make the sale).

After a long and very enjoyable time in India, the westernized comforts of KL were a refreshing change to reset ourselves and get ready for the next leg of our Asian adventure.