Making our way to Mangalore meant it was time for our first Indian railway ride! Due to the many warnings we opted to take a third class sleeper over the infamous unreserved cattle cars. We totally lucked out and had a section meant for six all to ourselves in an almost empty car. We took in the scenery, napped, ordered samosas (in Hindi!), and enjoyed the uneventful experience without a hint of what the hype about trains was all about. 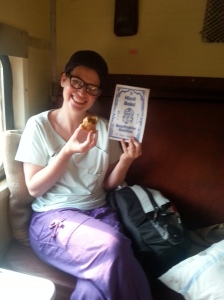 After a week relaxing on the beach in Gokarna, walking out onto the packed platform in Mangalore was a slap in the face. An “oh right, we’re in India” moment. Out of the calm and back into the sea of chaos.

Mangalore served as a rendez vous point where our group grew with the addition of Cameron Wylie joining us all the way from wintery Toronto. We didn’t linger long, but we did experience our first Indian shopping mall, including food court dining experience, and to simply show Cam the sights and sounds of India.

It was on the roof of our hotel in Mangalore that I finally had my first chai…and it was…interesting. I don’t know what exactly I expected but the sweetness and powdered milk flavouring was not it. It was not love at first sip, but since ordering chai is one of the few phrases we’ve learned in Hindi (baby steps…or sentences), it’s something I aim to try again and again.

The real adventure began when we finally tackled an Indian train ride in an unreserved car. To begin with it was….  Empty?!? We caught the train at it’s first stop, and were stunned to see how calm and pleasant the experience was.  Sure the seats weren’t the most comfortable, but we had room to stretch out.   With a virtually empty train, we were free to explore and hang out the doors of the moving train.  This experience is well worth the trip to India alone!  It is the type of thing you didn’t realize was on your bucket list until you experience it.  Watching the world go by, seeing the kids in the fields playing cricket.  Watching the little kids waving at the train and screaming with joy when that wave is returned.  Simply amazing.

Without the luxury of a dining car all the movies seem to depict, the food and refreshments came in the form of salesmen continuously walking back and forth the length of the train. The chorus of “coffeecoffeecoffee”, “chai, chai”, and “samooosa samooosa” sounded musical and tasted delicious. 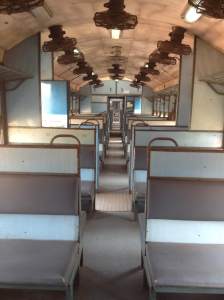 For about an hour we rolled in and out of stations with no change to our car or comfort. We lapped up the scrolling scenery and wondered what all the warnings and horror stories about train rides had been about.

And then it happened. We noticed it even before we reached the station, the unusually large crowd of people lining both sides of the train tracks waiting for the train to slow down enough to fight for a place to sit.  People hurled objects to save seats through windows, full families charged through the doors magically at the same time, two middle aged women got into an argument over the seat right beside Matt almost going fist to cuffs. The rapid change left us shocked and wondered what the hell just happened?! For the next three hours we were crammed in a car with people shouting, women laying in the aisles, children sleeping on Matt, and the beautiful serene landscape of the Western Ghats going by in juxtaposition. Well, what can you expect for a trip that cost less than a dollar for all three of us combined?

As the heat and dust took the fight out of everyone, the general atmosphere became much more subdued as we all just hunkered down for the long haul.  Once we had the bulk of the trip behind us, and the crowd slowly started waking me from nap time, the mood had taken a turn for better.  The crowd started to share food and and supplies with us, and became much more the hospitable hosts Indians have shown themselves to be when not fighting tooth and nail for a seat on a train….