After a few days relaxing in the retirement capital of Goa, it was time to move on.  We had heard so much about the ruins in Hampi, that we could not leave the area without stopping by to check them out.  The first thing to do was book a train ticket.  Unfortunately it turns out that the routes we want are the most popular, and would had to have been booked weeks or months in advance.  So again, our attempt of chasing that Indian train experience was not to come to fruition just yet.  The next option was the over night sleeper bus that went from 9pm to 7am.  As I sat in the travel office, and the agent showed me the computer screen of “seat” options.  The bus appeared to be a double decker, and each seat was actually a bed instead of a seat.  For an extra $5 a seat, we could get the a/c bus which would be the preferential option because India can be hot even at night.  Visions of this luxurious sleeper bus with nice beds on it danced in my head all night as I dozed off to sleep on our final night in Goa.

As we packed up, we said our goodbyes to the staff of our hotel and set out to the bus station.  Upon arrival at the bus station, we realized we had a lot of time to kill and we looked for anywhere which might offer food, a bathroom, and hopefully wi-fi to connect with the rest of the world.  As it turns out, this particular bus station is a little way from the city and our restaurant options were limited.  What we saw we recognized instantly, and to say that our first “western fast food” chain experience was one we were familiar with would be a lie.  It turns out that we are willing to eat at places in India we would never eat at back home.

As we made our way from the KFC back to the bus stop, a bus company employee informed us that we would be catching the bus at the side of the road in front of the KFC.  It was around this point that these naive western notions of this luxury bus started to evaporate out of my mind.  Even though my expectations were slowly settling back to reality, nothing could have really prepared me for what pulled up in front of us minutes later. 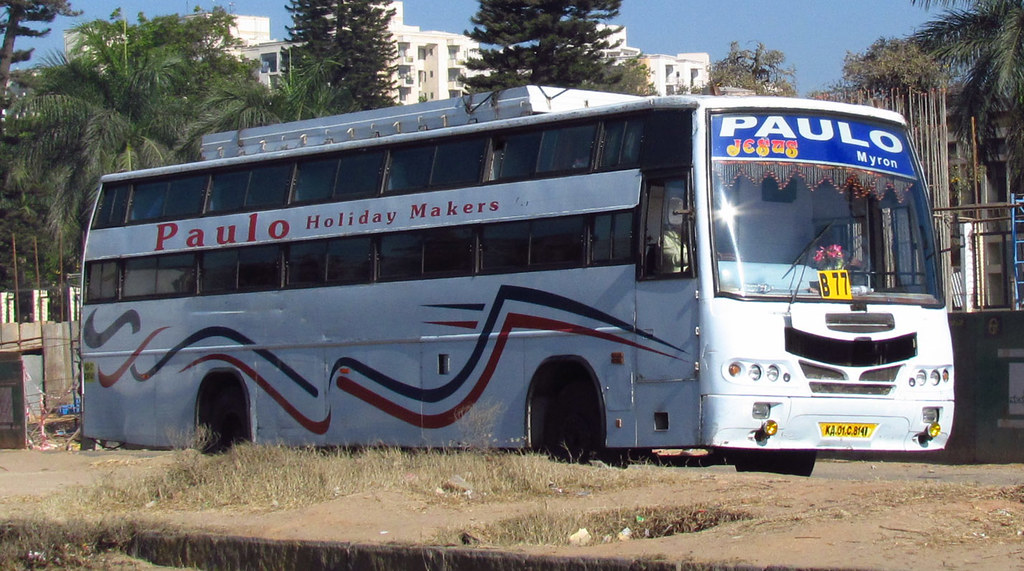 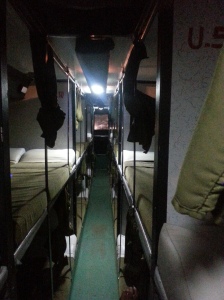 What we had was a cozy bed that would be a little too cozy if I didn’t know the person beside me!

p.s. the first photo isn’t of the bus we took…but it looked better so we used it as our feature photo…it is a bus we spotted upon our first meander through Hampi